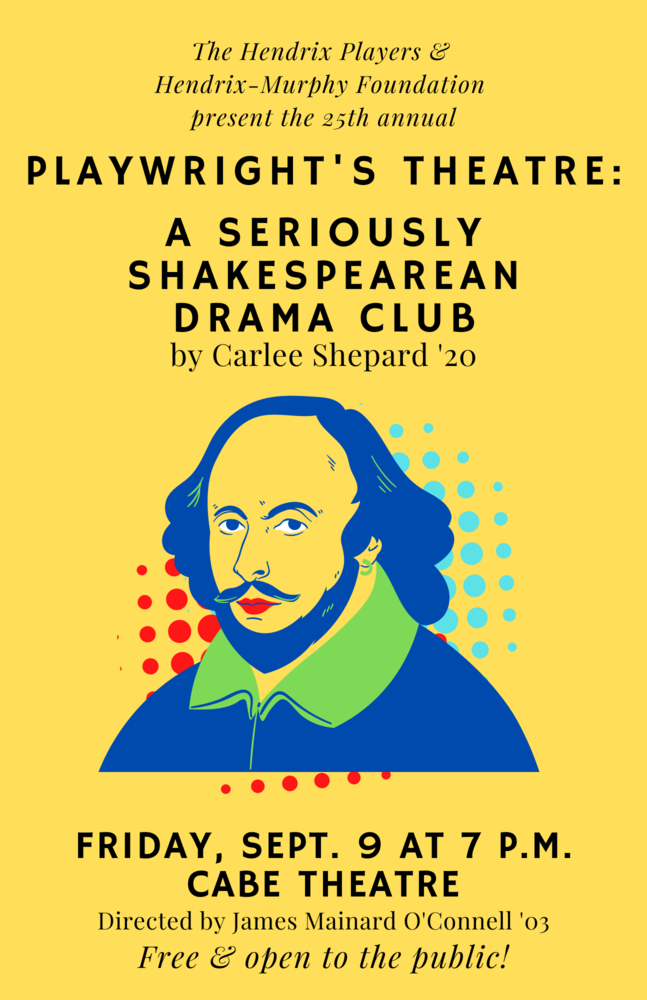 Hendrix College’s 25th annual Playwright’s Theatre will be held on Friday, September 9, 2022, at 7:00 p.m. in Cabe Theatre on the Hendrix College campus. This year’s play, A Seriously Shakespearean Drama Club, was written by Hendrix alum Carlee Shepard ’20. Hendrix alum James Mainard O’Connell ’03 will direct the staged reading. A discussion of the play will follow the reading. This event is free and open to the public.

In Shepard’s play, arguments erupt in English class over interpretations of Romeo and Juliet. This play asks, "What would happen if a class split in two begins to live out the plot of Romeo and Juliet? And then, five other Shakespeare plays?"  It isn't serious, but it is A Seriously Shakespearean Drama Club.

While at Hendrix, Shepard double-majored in Biology and Environmental Studies. She was also a Murphy Scholar, which allowed her to explore her interests in writing and languages while majoring outside of the Humanities. She is a native of Greensboro, North Carolina and credits her hometown’s performing arts program with nurturing her interest in theatre. She is currently in graduate school at Ohio State University where she studies entomology with a focus on native pollinator communities.

Playwright’s Theatre evolved in 1999 from the annual Student and Alumni Playwriting Contests first sponsored by the Hendrix-Murphy Foundation in 1986. The play selected for Playwright’s Theatre is either the first-place winner of the alumni contest or the first-place winner of the student contest. Both contests are judged by a professional playwright, and cash prizes are awarded to plays of significant promise. Every entrant receives an evaluation by the judge.

The cast of Playwright’s Theatre is composed of Hendrix alumni and current students. Playwright’s Theatre, founded by theatre faculty Danny Grace and Rosemary Henenberg, extends the efforts of the contest by enabling winners of the contests to see their plays in staged readings. The program also allows faculty and alumni to renew past relationships and students to build new ones while collaborating on innovative projects.

This event is co-sponsored by the Hendrix College Theatre Arts & Dance department and the Hendrix-Murphy Foundation.