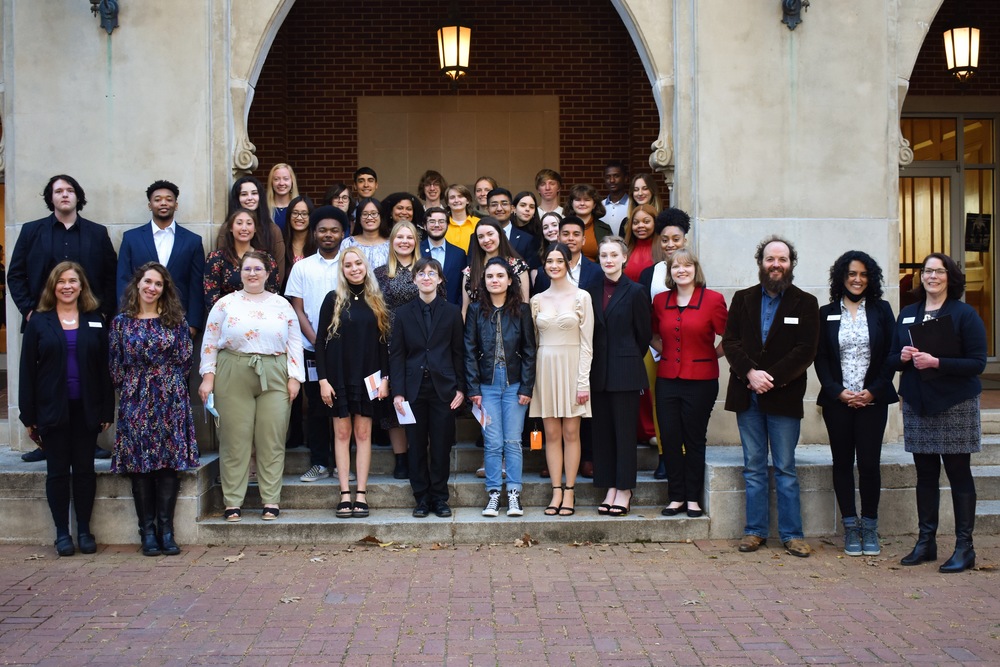 CONWAY, Ark. (April 6, 2022) – Thirty-four first-year Hendrix College students selected for the Murphy Scholars Program were formally inducted into the program at a ceremony held the evening of March 31, 2022. It was the first in-person induction since March 2019, with the previous two cohorts being initiated virtually due to pandemic restrictions.

Murphy Scholars explore literature and language at a more intensive level by participating in designated study, travel, research, and service experiences in literature and language during their sophomore, junior, and senior years at Hendrix. The program is open to students of all majors; this year’s cohort includes students majoring in 16 unique areas of study.

Seventeen percent of the first-year Hendrix College Class of 2025 applied to the program, and more than half of those applicants were selected as Murphy Scholars.

“Again, this was a strong and diverse pool of applicants,” said Hope Coulter, director of the Hendrix-Murphy Foundation Programs in Literature and Language, which developed and oversees the Murphy Scholars Program. “They had great references from faculty members who’ve gotten to know them this year. Some of the new Scholars have very specific interests in literature and language—spoken-word poetry, for instance, or learning Chinese, Tamil, or Romanian—and some are impassioned about reading and literature in a more general way.”

The Class of 2025 Murphy Scholars in Literature and Language are:

See more photos from the induction ceremony and reception

Hendrix-Murphy Programs enrich the study of literature and language for Hendrix College as a whole as well as for students with intensive interest in those areas. The late Mr. Charles H. Murphy, Jr., former Chair of the Board of Murphy Oil Corporation and former member of the Hendrix Board of Trustees, established the Foundation in 1978 in memory of his mother, Mrs. Bertie Wilson Murphy. A 1905 graduate of Galloway Women’s College—which later became part of Hendrix College—Mrs. Murphy possessed a lifelong love of literature and language, to which these programs are exclusively dedicated.

A private liberal arts college in Conway, Arkansas, Hendrix College consistently earns recognition as one of the country’s leading liberal arts institutions, and is featured in Colleges That Change Lives: 40 Schools That Will Change the Way You Think About Colleges. Its academic quality and rigor, innovation, and value have established Hendrix as a fixture in numerous college guides, lists, and rankings. Founded in 1876, Hendrix has been affiliated with the United Methodist Church since 1884. To learn more, visit www.hendrix.edu.